"Deadbeat" follows the journey of 4 girls to rid the surface of the undead through the power of music. "Deadbeat" fits into the rhythm/shooter game genres.

The demo ends after the 3rd level. To enter full screen, click the expand icon on the bottom right.

The basic story of my game is that the undead has invaded, and only music can stop them! Your mission is to get to Metre City, where speakers everywhere are connected to. From there, your plan is to blast music in order to rid the world of the undead once and for all!

For the past two years, I’ve attended this camp and made platformers, and I noticed, so did almost everyone else. I decided to challenge myself this year by making a rhythm game, using a platform not made for them.

First I tested to make sure that it was possible to code a rhythm game in Construct 3. Originally, I was going to make something really basic, with no story/plot. However, at midnight, I came up with the name "Deadbeat", and that's from where the whole idea of fighting the undead stemmed from.

I really like a mixture of cute/creepy in games (ex: Undertale / Omori), so I decided to have a cute art style contrast with some sketchy monsters!

Some of my favorite games are: Omori ; Danganronpa ; Undertale ; Cytus 2 ; Your Turn To Die / Kimi ga shine!

I love to draw, and have recently switched over to digital art. I am currently practicing animating. I also fence competitively!" 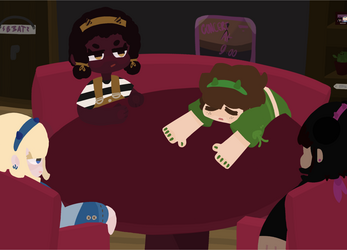 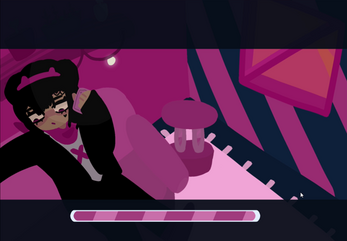 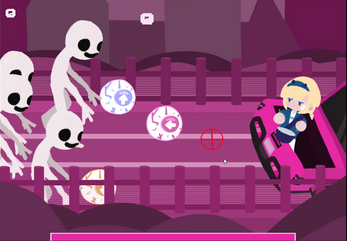