Rem's Reality is the story of Rem, a kid who lives on a floating island with their family. However, this world is not easy to navigate for a person like Rem, who is unlike all other Hybrillians: Where they should have wings and horns, they instead possess a tail and a pair of ears. When they fall off their beloved home and find themselves hundreds of meters below Pluveil, how will they manage to get back?

The game may take a second to load. To enter full screen, click the expand icon on the bottom right

Rem's Reality is focused around Rem, a raccoon-hybrid who lives with a family of Hybrillians and doesn't even realize that they're adopted. They live in a small town on a floating island named Pluveil with their mother and sister, Irene, as well as a little black cat they positively adore. Their dream since childhood has been to go to Luvia, a prestigious Hybrillian-only University. However, their mother has told them that that'd be impossible since they have no wings, and no Aircrafts that go to Luvia come anywhere near Pluveil. When the story starts, Irene tells Rem that she found a way to get them to Luvia, as she has a friend who works at the local Aircraft company. But it seems that their mother is still against them going, but before they get to ask her why they find themselves falling off of their beloved home island and into the depths below. After that, they meet Tor, whose real name is Toran. They were one of the first Hybrillians who suggested that their species move to live in the clouds and out of the way of the Fallen, another species who inhabited these lands. Toran helped Luvian, the leader of the Hybrillians, build a University, one that would come to be named Luvia. After Luvian died, she became its headmaster, but she preferred to stay undercover in the mushroom caves to not have to be constantly praised for running such an incredible school. Toran shows Rem how to get back to their home with the help of bouncy clouds, and meets Rem back at Luvia when they finally reach the top. She reveals to Rem her real identity and offers her a scholarship to Luvia. Rem immediately accepts but says she should call her mother beforehand. Her mother lets her go and reveals that she didn't want Rem to go to Luvia because of their lack of money. Toran welcomes Rem to Luvia, and the credits start to roll in. However, was lack of money really the reason Rem's mother didn't want them going to their dream school or is something more going on behind the scenes?

Rem's Reality went through many changes before I finally came to what I have now. Before camp even started, I tried brainstorming for game ideas and came up with a game in which you were a dog with a bazooka who jumped on clouds and clicked on enemy foxes to stop them from destroying your clouds. I then decided I wanted to switch it from dogs and foxes to angels and demons, but then decided to switch it to angel-like creatures and small enemies. At first, Rem was going to be a Hybrillian with deformed wings named Remi, but then I decided to change them into a Racoon-like hybrid. There weren't any direct games that it was inspired from, but it is loosely based on Undertale/Deltarune and Pokemon Crystal/Emerald.

"I spend a lot of my time drawing and animating on my drawing tablet, as well as creating new characters and stories. Telling stories through art, with either comics or games, has always been one of my favorite things to do. As well as art, I also love playing video games such as any Pokemon games I can get my hands on, Minecraft, Genshin Impact, and many more :D" 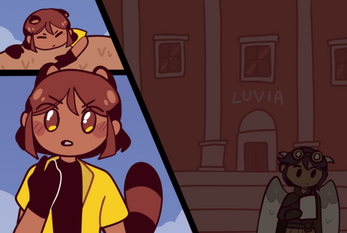 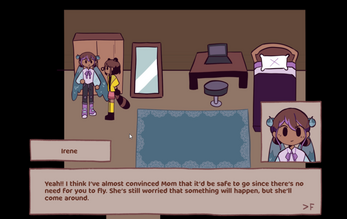 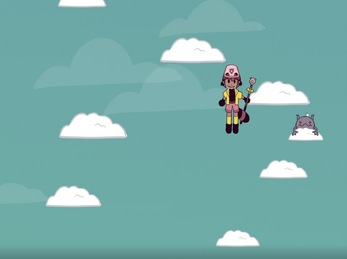