You play as a great white shark who does small things to help save the ocean from humanity's actions. This teaches the player to take small, daily actions to help the environment in the real world and dispels myths about marine life (like that sharks are murderous machines).

The characters (who all go by their species name to teach people what the species are called) include a very proper Caribbean reef octopus, a young peppy rough toothed dolphin, an abrasive green moray eel, and a sand tiger shark (the player character). There is also a marine biologist named Mina who frames the mostly fictional game as a movie being watched in an aquarium theater and provides the player mostly factual information, which helps the player differentiate between what is true in reality and what is part of the game narrative.
Speaking of narrative, the story (so far) is that the dolphin is caught in plastic trash and needs both the player's and the octopus's help to get out and back to her pod. While the octopus comforts her, you find a shank made out of a toothbrush the octopus can use to cut her out of the debris. You might instead choose to give the toothbrush to the green moray, who needs it to clean his eye. If you free the dolphin, she asks for you to escort her to the next reef open, where you two are jumped by a fishing boat, ending in your death and either her capture or escape, depending on what the player chooses.

The original idea for the game came when I watched a documentary from an individual creator on YouTube, found here: https://www.youtube.com/watch?v=CqykkfT8NlM. I have always cared about the environment, but seeing what humans did to sharks from this video made me outraged and heartbroken. I wanted to do something about this, so I decided to make a game to teach others about the situation in the oceans and dispel certain myths about marine life. I played around with doing a similarly theme game, but with the player as an elephant or a wolf, but eventually I decided on sharks to better utilize the passion the video has ignited in me. After deciding on a theme for my game, I then wrote the following statement:
Most people care about saving large, charismatic mammal species like orangutans, elephants, and polar bears. I wanted to make people care about a species that they are likely afraid of and may not realize was in danger. To challenge myself, I chose a species of shark, which I have had difficulty recognizing as worth protecting myself. (Of course I didn’t want them to go extinct, I just didn’t realize how much trouble they were in and how much I subconsciously disliked them.)
Sharks are some of the most feared animals in the world, along with snakes and spiders, but they’re also some of the most majestic. We have no more reason to fear sharks than we do lions or owls. They are all simply predators at the top of the food chain, but while many regard felines and raptors as powerful and beautiful, they think of sharks as ugly and malicious. I made this game to change that image. To do that, I tried to accentuate how cute the sharks are in my art and how much they can be empathized with in my story. 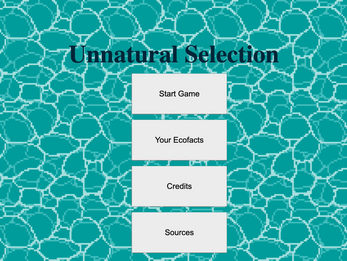